skip to main | skip to sidebar

The day after my fresh powder riding experience, I got a call from Snow. No, really, that's his name.

Anyhow, he was stuck at home due to the snow and wanted to go snowboarding. Free riding fresh in my mind, we set out for the Iwo Jima Memorial and the Netherlands Carillon in search of a slightly taller hill with a less exhausting approach than the one I'd tried 24 hours prior.

He packed a shovel to build a learning-sized kicker on the side of the hill we found. A hill that many gather on in July to watch the fireworks over the National Mall. In view were the Lincoln Memorial, Washington Monument, and U.S. Capitol. Clear, blue skies above, and nary a soul nearby.

As we hiked and rode over and over again, we got a few curious stares from passing cars and a few walkers. Before too long, I was getting better at catching air, though my landings were still spectacular failures. My partner-in-crime slash instructor was hitting all of his 180s, but couldn't quite manage the 360s he was working on.

After a while, an SUV rolls up, and two guys get out. They say their from the BBC and want to take some footage of us on the hill. Um, sure?

To be honest, I wasn't exactly jazzed with the idea. Cameras intimidate me in my best pursuits, which is why perhaps I hide behind mine while shooting my favorite hobbies. After a dozen or so falls on my part and much better success on his, they pack up their gear, stick a microphone in our faces, and ask us a few off-the-cuff questions. Our answers were less than eloquent, but we were apparently on that night's news on BBC. Too bad we never got to see it, despite giving the crew our email addresses.

The story's not done yet. A guy in a Navy (capital N for branch of service, not color) sweatshirt shows up toting two better-than-mine Nikons. He sets himself up for some photos of our view and also asks if he can shoot some of us. Content to be captured by still frames this time, we both think, "Why not?" I think I was more excited for this prospect because even if I fell every time, there were bound to be a few shots that at least made me look like I knew what I was doing. 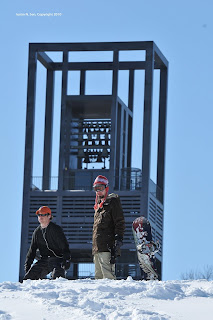 I was not disappointed. By and by, he emailed me the files, and they were excellent. Check out some more of Justin Sen's photography, featuring yours truly at his website.

Mr. J
Washington, D.C., United States
I'm a teacher with a penchant for outdoor adventures. Life amuses me most of the time. I write and take photographs of the world around me. I took a photography class in high school, but it wasn't until recently that I rekindled that interest. I shoot most often with my Nikon D60, but also with a 35mm Canon AE-1.